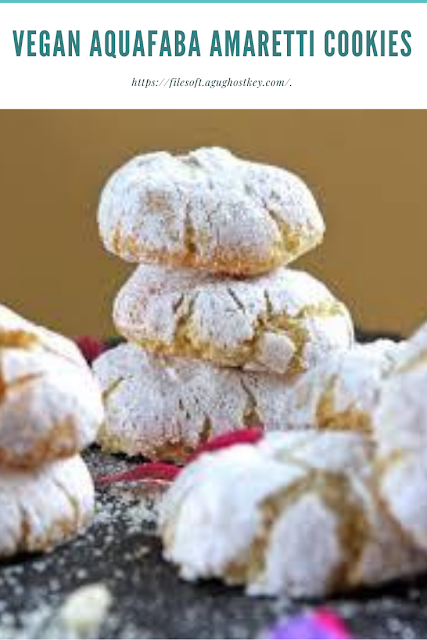 These chewy almond cookies are made with little more than almond flour, sugar, and whipped aquafaba (chickpea liquid), making them completely vegan and perfect for the pantry.

Then, in a large bowl, combine the ground almonds, sugar, and baking powder.

Place the aquafaba (only use 4 tbsp / 60ml if using Amaretto) and lemon juice in a perfectly clean bowl - even the smallest grease residue will keep the aquafaba from reaching steep peaks.

Whip the aquafaba with an electric mixer until stiff peaks form - you should be able to invert the bowl overhead, and the mixture should not move at all.

Gently stir 2 tablespoons of whipped aquafaba into the mixture, then gently stir in the rest.

Shape the mixture into balls (I made fifteen 26 g / 0.9 oz balls) and roll them in icing sugar.

Place the cookies on the prepared baking sheet, making sure to leave enough space between them.

You can leave them as they are or gently flatten them with your palm. The former look cuter (I think), but the latter have a crispier shell when cooked.

Bake for about 17 minutes, until tops are lightly browned and cracked in places. Let them cool completely to crisp and become less brittle.

Store them in an airtight jar for up to 5 days.