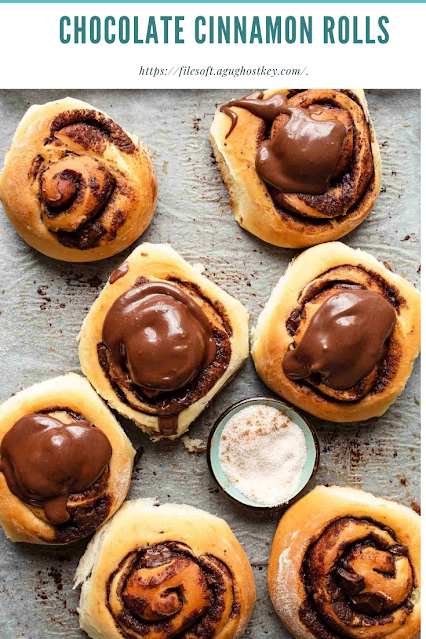 1.In a large bowl, beat together flour, chocolate , leaven , sugar and salt.

2.Make a hole within the center and add milk, butter, egg and vanilla . Mix well, then blend everything together with your hands to make a sticky paste.

3.Transfer the dough to a lightly floured surface and knead for about 5 minutes until smooth and elastic.

4.Place the dough during a lightly greased bowl, cover with cling film and let it rise during a warm place for 1 to 2 hours or until it's doubled in size.

TIPS: Preheat oven to 140 ° C / 275 ° F / gas 1. After preheating, close up the oven. Place the covered dough inside and let it rise during this warm environment.

5.In a small bowl, combine the butter, sugar and cinnamon until smooth. Set aside.

6.Once the dough has doubled in size, gently deflate it together with your hands and transfer it to a floured surface. Roll it into a rectangle about 20 x 12 inches (about 1/4 inch thick).

7.Distribute the filling throughout the dough. Sprinkle with chocolate chip, then from one long end, roll up to make a decent wooden stick.

8.Cut into 12 equal rolls (or 15 small rolls) and place during a greased 9 x 13 inch baking sheet. 9.Cover it with cling film and let it rise again during a warm place for 1-2 hours. See the TIP above for a faster climb.

11.Cool during a skillet on a wire rack while making garnishes.

12.Mix the cheese and butter until combined. Add powdered sugar , chocolate and vanilla, stir until smooth and soft.

You have read CHOCOLATE CINNAMON ROLLS, hopefully useful and don't forget to share this post via the button below: