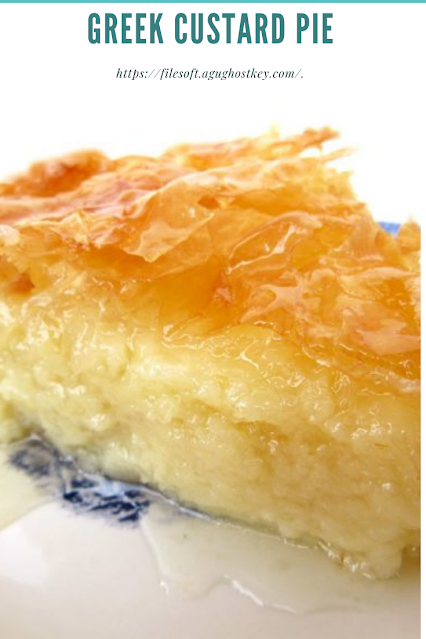 When the Greeks did not fast from animal products, there were periods in between when they enjoyed more “luxurious” foods such as eggs and butter and desserts reflected this.

ASSEMBLY OF THE PIE:

First, preheat the oven to 375 degrees F. Have your pan ready to use - either a 16-inch round cake pan or a 10 x 13-inch lasagna pan. The phyllo dough should be at room temperature or slightly cooler. Open the packaging just before using it so that the leaves do not dry out.

Then, stir the milk, semolina, ½ cup sugar, butter and vanilla in a large saucepan over medium heat. Stir the mixture gently but constantly until it becomes thick like pudding. It may take up to about 15 minutes. Remove the pan from the heat and let cool for 5 to 10 minutes. Beat the eggs with the remaining 1/4 cup of granulated sugar in a small bowl, then stir into the milk mixture. Stir in the orange zest.

Melt the butter and start by brushing the bottom of your pan with melted butter.

Layer the bottom of the pan with about half of the phyllo dough, brushing liberally with butter between each layer. Lightly press the leaves into the sides and corners and let the edges hang over the top; you will fold them back later. (Don't skimp on the butter! You should use half on the bottom layers and half on the top.)

Pour the slightly cooled cream on the bottom leaves and spread it on the sides. Layer the remaining phyllo sheets on top of the custard just like you did for the bottom, continuing to brush the melted butter between layers until you have used all of the phyllo dough. Then brush the butter over the overlapping sides and roll the edges down, creating a "rim" around the edge of the pan. Brush the top and edge generously with the rest of your butter.

Bake in the preheated oven until the top is completely golden, 30 to 45 minutes. (I suggest checking early and often, as you don't want the phyllo dough to burn.)

While the pie is baking, prepare the syrup. Bring the sugar, water and orange juice to a boil in a small saucepan. Boil for 5 minutes then remove from heat. Off the heat, stir in the vanilla extract; put aside.

When you remove the pie from the oven, let it cool for 15 minutes. Then pour the syrup evenly all over the pie. Let the pie rest for at least 1 hour before serving so that the syrup can be absorbed. Store leftover pies in the refrigerator for up to 3 days. Happy Cooking Time.

You have read Greek Custard Pie, hopefully useful and don't forget to share this post via the button below: