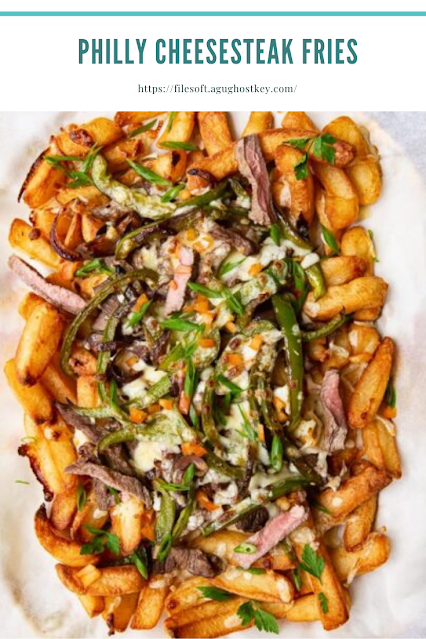 Get big together with your next home tailgating party with this big plate of cheesesteak-filled Philly Fries! Fresh steak, peppers, cheese covered onions on a fried spoon - heck yeah!

Mayo, ketchup, or other seasonings as desired

1.Preheat the oven consistent with the directions for french-fried potatoes .

2.Arrange two pans and divide the fries evenly between them during a layer. Bake until golden brown and cooked.

3.Meanwhile, season the steak with salt.

5.Cook the steaks, 2 to three minutes per side, until an honest crust forms and comes off without a hitch.

6.Remove the steak and wrap in foil.

7.In the same skillet, put the peppers and onions. Let the caramel sit for 3 to five minutes.

10.Remove the french-fried potatoes from the oven and place on the grill.

11.Place a layer of french-fried potatoes on a skillet, top with 1 / 4 of the cheese, 1/4 of the steak, peppers, and onions. Place it under the grill for 1 minute just to melt the cheese.

12.Remove and punctiliously stack the remainder of the fries on top.

13.Top with the remaining peppers, onions, steak and cheese.

14.Place under the broiler again for two to three minutes, until the cheese is melted.

15.Remove and let the skillet cool to the touch, placing it safely, but letting the guests serve themselves from the recent plate of fried cheese.

You have read Philly Cheesesteak Fries, hopefully useful and don't forget to share this post via the button below: