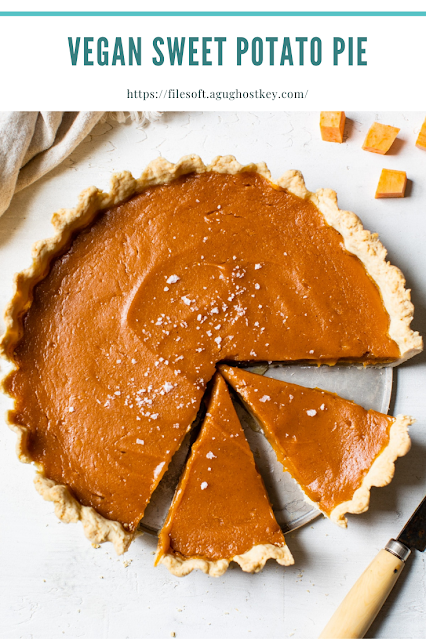 Vegan sweet potato pie, lightly spiced with nutmeg and cinnamon. Use your favorite pie crust to make this easy dessert.

First, prepare the vegan pie crust as directed. It is not necessary to precook the crust. You can also use a store-bought vegan crust or this healthy vegan pie crust for a lighter, gluten-free option. Once the pie pan is covered with the uncooked crust, place it in the refrigerator while you prepare the filling.

Then, preheat the oven to 350 degrees F. Peel and chop the sweet potatoes, then place them in a medium saucepan and add enough water to cover. Bring to a boil, then reduce heat and simmer for 12 to 15 minutes until the fork is tender. Drain the potatoes and add them to a large bowl (or a stand mixer if you have one).

With a mixer, beat the potatoes until smooth, then add all the remaining ingredients (except the whipped cream!) And beat on high speed until smooth and combined.

Spread the sweet potato filling evenly over the pie crust and bake for 55 to 60 minutes, until the center is only slightly shaken. If the crust begins to burn or brown too much, use a pie cover or cover the edges with foil during the last half of baking.

Let the pie cool on a cooling rack for about an hour before slicing and serving. Serve with vegan whipped cream, if desired. Store leftover pie in the refrigerator for 5 days. Happy Cooking Time.

You can use any pie crust you like here. A cookie crust would also work, but be sure to check the ingredient list for milk, butter, or honey.

For a less sweet pie, you can reduce the necessary brown sugar. 1/2 cup would work even, or try using coconut sugar instead.

Many stores now offer some kind of dairy-free whipped topping, like Reddi Whip Almond or Coconut Whip or SoDelicious CocoWhip.

The pie can be made ahead and frozen. Simply thaw at room temperature just before serving.

You have read Vegan Sweet Potato Pie, hopefully useful and don't forget to share this post via the button below: