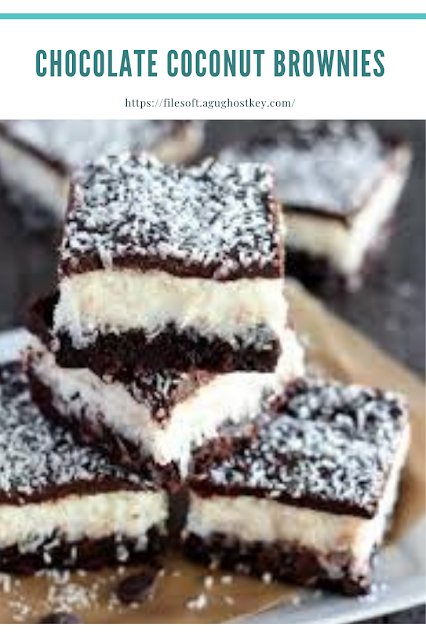 Coconut lovers, this chocolate and coconut brownie recipe is for you! A creamy and rich chocolate brownie, a sticky coconut filling and a gooey ganache filling. You could almost call them premium brownies.

Then, line an 8-inch square pan with parchment paper.

In a small bowl, melt the butter with the semi-sweet chocolate chips in the microwave. Check and stir at 30 second intervals as you don't want to overheat this. You want it to be melted but not hot.

In another bowl, combine the flour, cocoa powder and salt. Put that aside.

In a large bowl, whisk the sugar with the eggs and vanilla until well combined.

Add the melted chocolate mixture to the egg mixture and stir just enough to combine.

Add the flour mixture to the chocolate mixture and stir just enough to combine.

Fold in the milk chocolate chips.

Pour the brownie batter into a baking pan lined with parchment paper.

Combine all the ingredients in a large bowl and mix well to combine well.

In a small saucepan, bring the heavy cream to a boil over medium-high heat.

Once boiling, immediately pour over the chocolate chips. Let stand 5 minutes before stirring.

Refrigerate the ganache for at least two hours before spreading it over brownies.

Spread the chocolate ganache on the coconut layer as soon as it comes out of the oven.

You have read Chocolate Coconut Brownies, hopefully useful and don't forget to share this post via the button below: