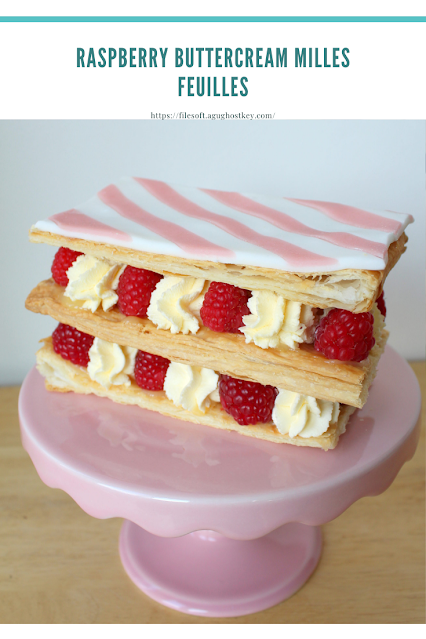 a few tablespoons of milk

For the raspberry coating

Raspberry jam for 2 layers, a few cup or two.

For the vanilla icing

For the striped brown filling

1.Roll out the puff pastry into three 8-inch squares. Place on a baking sheet lined with parchment paper. you'll got to bake them individually counting on the dimensions of your pan. Place the dough by poking holes in it with a fork about every half inch over the whole surface of the dough. Chill within the freezer for 10 minutes to form sure it's cool. Puff pastry MUST be cooked very cold. Place a sheet of parchment paper on top of the dough and weigh it with another baking sheet on top. This prevents the dough from rising an excessive amount of and ensures that it's crispy when baked.

2.Bake during a 425 degree oven for about quarter-hour . Reduce heat to 375 degrees F, remove top pan and top sheet of parchment paper and bake for about 5 minutes approximately until golden brown. Cool pastry sheets completely before filling them.

1.Mix all ingredients until smooth. Add a touch milk initially , then add more if you would like it. you would like the frosting to be extra thick here. It should be easy to use but as thick as possible is preferred.

1.Take 1 / 4 of the frosting and spread it evenly over the finished layer of dough. aside from icing, grease with excellent quality raspberry jam.

2.Spread another quarter of the frosting on subsequent baking sheet and flip it over the raspberry jam in order that the jam is sandwiched between two thin layers of frosting. this system helps the finished dough to stay together better.

3.Then spread another quarter of the frosting over the flipped dough layer, followed by another light raspberry jam. Finally, spread the ultimate icing on the last sheet of toasted puff pastry and flip it over the raspberry jam. Cool the built-up mille-feuille while you prepare the frosting for the highest .

1.Mix powdered sugar , vanilla and milk well, using only enough milk to form the icing very thick. The enamel should be right at the purpose where it can barely be poured, but still on a flat surface once you stop stirring, albeit it takes a couple of seconds to try to to so. Spread the icing evenly over the built up mille-feuille surface.

Decorate the highest with brown stripes.

1.Melt the chocolate chips and butter.

2.Pour the melted chocolate into a Ziploc bag and cut the corners with scissors. The aperture should be quite small, about the dimensions of a pencil tip. Draw brown stripes everywhere the frosting, parallel to every other and about half an in. apart. Using the rear of a knife or toothpick, draw a perpendicular of brown lines across the surface of the glaze, roughly every inch, alternating the direction of the road as you go.

3.Refrigerate the finished mille-feuille for a minimum of two hours, preferably longer. Cut all four sides of the dough in order that they need straight sides before cutting into 8 rectangles or 16 squares. Toppings are a baker's bonus ... take advantage!

You have read Raspberry Buttercream Milles Feuilles, hopefully useful and don't forget to share this post via the button below: