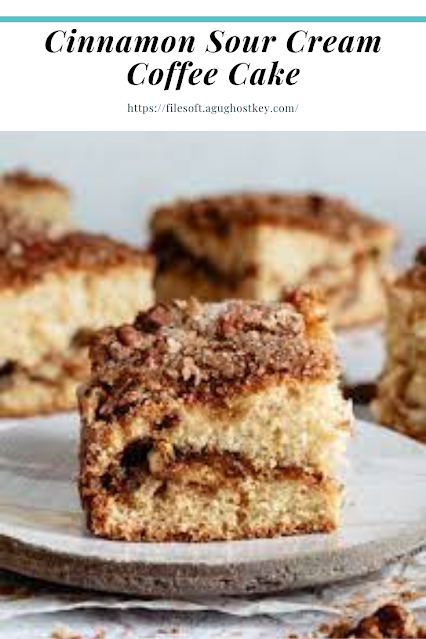 This sour cream coffee cake is the queen of breakfast cakes! Super soft and chewy with a great cinnamon crunch, this is the only coffee cake recipe you'll ever need.

Combine flour, brown sugar, cinnamon, nutmeg and butter in a medium bowl. Mix with a fork until lumps form.

Then, in a medium mixing bowl, whisk together flour, baking powder and cinnamon.

In a large mixing bowl, beat together butter and sugar until light and fluffy, about 3 to 4 minutes.

Add the eggs and vanilla and mix well, scraping the sides of the bowl as needed.

Add sour cream or Greek yogurt and stir until combined.

Pour half of the cake batter into the prepared pan and with an offset spatula, roll out to cover the bottom.

Sprinkle half of the cinnamon streusel evenly over the cake batter.

Cover with the rest of the dough and sprinkle again with the remaining streusel.

Bake, 30 to 35 minutes, until lightly browned and a toothpick inserted in the center comes out with moist crumbs. Happy Cooking Time.

You have read Cinnamon Sour Cream Coffee Cake, hopefully useful and don't forget to share this post via the button below: